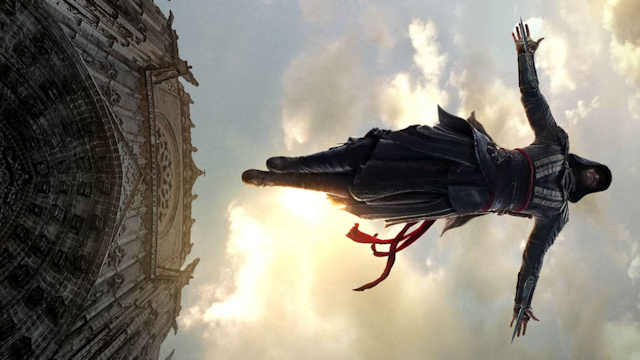 It is, at this point, bordering on one of the central tenets of Hollywood that movies based on video games generally aren’t any good.   Over the years, the film-going public have had to suffer through plenty of evidence to back this up, and so it is with this mindset that I cautiously approached the latest attempt to bring a video game franchise to the big screen, Assassin’s Creed.

I should probably get it out of the way from the start that I’ve never played any of the various games in the franchise.   Generally they’ve tended to look rather fun and all that, but it’s always been a case of so-many-games-so-little-time, so I’ve never delved into them, so, other than the basic idea of a modern-day human using some technobabble called the Animus to explore “ancestral memories” of Assassins that he happens to be a direct descendant of, I know little or nothing about what to expect.

All of which may well have stood me in good stead, going in knowing effectively nothing and not really expecting too much, because, on the whole, I did find myself rather enjoying Assassin’s Creed.    It helps that the cast is surprisingly good for a film like this.   The ever-watchable Michael Fassbender takes the lead in the dual role of Callum Lynch, a modern-day criminal whose execution is faked to bring him into the Animus program and Aguilar, his Assassin ancestor from the Spain of 1492, with Jeremy Irons and Marion Cotillard as the father/daughter team behind the project and Brendan Gleeson in a small but key role as Lynch’s estranged father.

The plot is pretty straightforward; Jeremy Iron’s character wants control of an ancient artefact and Lynch’s ancestor is, according to history, the last person to have it in his possession.   Abstergo, the obligatory evil corporation (seriously, is there any other kind in movies?), fake Lynch’s execution and stuff him into the Animus to relive Aguilar’s memories and find out where he stashed it.   Time is, as per usual, of the essence, partly because the powers behind Abstergo want results or they’ll shut down the program, but also because going into the Animus is badly affecting Lynch’s mental state as his ancestor’s memories begin to merge with his own.    The filmmakers don’t waste too much time getting on with things, as a result of which the film rattles along nicely.   Visually, the film sets up a solid contrast between the present day (largely monochromatic) and the past sequences (mainly earthy tones).    Action sequences are generally well-staged and effective.   Rather surprisingly, all of the 1492-set memory sequences are delivered entirely in Spanish, despite having a perfectly workable in-universe excuse not to (that Callum’s brain interprets the Spanish into a language that he understands).   Granted, the memory sequences are mostly extended action sequences with relatively limited dialogue, but it’s an unexpected and rather brave choice that does add something to those sequences.

Probably the biggest problem with the memory sequences, to be honest, is that there aren’t more of them.   I didn’t exactly sit there and time it, but probably no more than a third of the film is set during Lynch’s Animus dives back into the past.   That’s a shame, really, because they tend to be the stand-out sequences in the movie.   And you come out of the movie wanting to know rather more about Aguilar and the group of assassins to which he belonged, who they are, more about their goals, how their group is led, all that sort of stuff.    It very much comes across that there’s quite a rich mythology there, none of which you really learn during the action sequences that dominate that aspect of the movie.    You could easily get a whole movie out of what we see during those sequences and it’s possibly a shame that we didn’t.

In the end, Assassin’s Creed is a B-movie, no question about that, but one that works pretty well, even with its flaws.   And it’s one that I ended up enjoying more than I expected to.    Sometimes, that’s all I need from a movie..

This is a text widget, which allows you to add text or HTML to your sidebar. You can use them to display text, links, images, HTML, or a combination of these. Edit them in the Widget section of the Customizer.
%d bloggers like this: