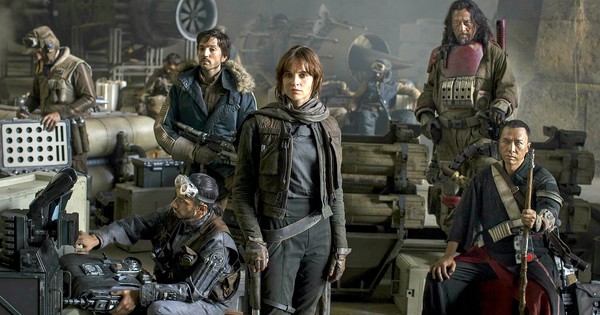 The original Star Wars is, I think, the first film I actually remember seeing at the cinema.   There were others that I saw before it, I know that from my mother, who, based on her stories, regularly had to put up with an over excitable small person at the cinema, but Star Wars is the first one that I actively recall seeing.   So it’s been part of my movie-going life for as long as I can remember having one.    And it’s safe to say that I actively enjoy hanging out in a galaxy far, far away and there’s really been no aspect of it that I haven’t enjoyed.

Yes, that includes the prequel trilogy.  Not always a popular opinion, to the extent that I’ve actually been told to my face that I can’t possibly be a true Star Wars fan, but I like them and make no apology for doing so.

Anyway, over the last couple of decades, there have been dozens of different Star Wars books, most of which I’ve read and enjoyed to one degree or another.   Many, a majority, focus on the Skywalker/Solo clan beloved of the movie trilogies, but there have been some that have set their focus elsewhere, following the exploits of a minor character from the movies, or even eliminating the movie characters altogether, often by setting the story in a different time period to the original movies and exploring a whole new aspect of the Star Wars universe.    While, as one would expect, the quality of those books has varied, I’ve always found it interesting to take a look aside from the main storylines of the trials and tribulations of Luke, Han, Leia and company and so, when I heard that the first standalone Star Wars movie would focus on a little-known, but utterly pivotal moment in that universe’s history, the theft of the Death Star plans that set in motion the events of the original movie,  I was most certainly interested to see what they came up with.

Set in the days immediately prior to the original movie, the film follows Jyn Erso, a bitter and disillusioned criminal who, having lost both parents (her mother slain, her scientist father taken away to work on a top-secret military project) to the Empire, prefers to keep her head down and not get involved.    Reluctantly dragged into action by the Rebellion, looking to use her to get to a defector pilot who claims to have a message from her father, she learns the truth about the Empire’s new weapon and, backed up by a motley crew of misfits, sets out to rescue her father from the Empire’s clutches and find a way to destroy the Death Star.

The storyline flows well, travelling from planet to planet, anchored by a couple of visits to the Rebel Base on Yavin 4, meticulously recreated from the original movie.   Both the stakes and the risks rise with each new world the team visit, as they learn more about what they’re facing and the odds arrayed against them increase.    Hope, or the lack thereof, is very much a key part of the storyline; as the truth about the Empire’s terror weapon becomes horrifyingly clear, retrieving the plans becomes the last hope for an increasingly demoralised Rebel Alliance.

The characters, as noted above, are something of a motley crew, but work well.   Felicity Jones’ Jyn makes a likeable lead, her disillusionment dropping away to be replaced with a new determination, and works well with Diego Luna’s Cassian, a Rebel captain who’s not always happy with what he’s had to do as part of their campaign against the Empire.   The rest of the squad, defector pilot Bohdi (Riz Ahmed), blind warrior monk Chirrut (Donnie Yen, putting his impressive martial arts skills to good use) and heavy weapons master Baze (Jiang Wen) all get strong moments, but are all comprehensively upstaged by the obligatory ‘droid, K-2SO (geek favourite Alan Tudyk), a former Imperial security droid whose reprogramming has resulted in a snarky personality that neatly allows him to steal every scene he appears in.

On the Imperial side of the equation, Ben Mendelsohn’s Krennic, director of the Empire’s Advanced Weapons division takes central stage.   He does pretty well with the role, but is regularly overshadowed by characters returning from the original movie.   Darth Vader appears and gets a couple of cool moments, but more prominent is Grand Moff Tarkin, here presented as a rival to Krennic, keen to usurp control over the Death Star and undermine Krennic’s authority within the Empire.   Tarkin reappears courtesy of an pretty impressive CGI reconstruction of Peter Cushing.   It’s not perfect, by any means, and at times tumbles quite deep into the uncanny valley, but it’s so fitting to have the character there that it’s reasonably easy to overlook the flaws.

Uncanny valley issues aside, the film looks gorgeous, with some genuinely epic shots in the capable hands of director Gareth Edwards.   The special effects are mostly near flawless, with everybody bringing their A-game to making the whole movie look as good as it could possibly be.

Key to the film’s success is that, despite the absence of much loved characters from the previous movies, it still feels very much like a Star Wars film, albeit a more grounded one.   The mystical aspects that permeate the originals are toned strongly back, with Vader as the only acknowledged Force user present in the film (Chirrut’s status is rather ambiguous), with the movie feeling more like a war film, particularly the final large-scale action sequence.   The film makes considerable effort to fit in with the original movie, being set only days before it and generally succeeds extremely well.   The recreation of the Yavin base is near-perfect, and a number of minor Rebellion characters from the first film reappear, either through the medium of impressively solid lookalike casting, or, in a couple of cases, using carefully altered footage from Star Wars.   Rogue One also neatly sidesteps an issue that some people have with prequels, in that you know where things have to end up.  In this case, as the titular squad is made up entirely of previously unseen characters, the audience, while they know that the mission to retrieve the plans will be a success, have no way to know who, if anybody, is going to make it out alive.

The whole idea of standalone movies set in the Star Wars universe is very much one that I like the sound of, and choosing Rogue One, based, as it is, around a pivotal moment in their history, as their opening salvo has been a very smart choice.   A young Han Solo movie is up next, starring Alden Ehrenreich in the lead role.   To my mind, that’s not as inherently interesting a concept, but I’m more than happy to give them a chance on that one.   But with Rogue One, it’s safe to say that the standalone films are off to a very good start.

This is a text widget, which allows you to add text or HTML to your sidebar. You can use them to display text, links, images, HTML, or a combination of these. Edit them in the Widget section of the Customizer.
%d bloggers like this: